“Freebirthing” to air on the Discovery Health Channel09 October 2008 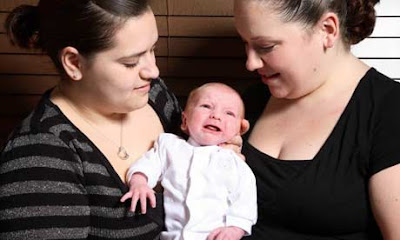 The unassisted childbirth documentary “Outlaw Births” aired in the UK on Wed. night and by all accounts was an interesting program! As usual, there were numerous negative comments throughout from medical professionals but that’s to be expected. There was also too much emphasis (by most accounts) on the problems one American woman, Heather, had on delivering her placenta. The placenta was slow in coming so Heather went to the hospital. While this actually wasn’t an emergency, it was presented as such in the program. Still, in most people’s minds this didn’t overshadow the beauty of Heather’s homebirth.

Two clips have been posted on YouTube. The clips feature UK UCer Clair and her partner Yasmin, but in the beginning of the first clip you’ll see 2-second shots of 2 other UC’s – Josephine’s and Monique’s. There is also a shot of my friend Cassie looking euphoric as she holds her baby just after the birth, and a few shots of Heather and another UK UCer, Clio in labor. Click here and here.

I’ve already received numerous letters from people around the world who would like to watch the program. Unfortunately at this point it isn’t for sale, although I’ve been told that eventually it will be shown in other (as of now unknown) countries. Those who live in the UK can view the program free here.

I’m enclosing two reviews below, one from my UK friend Cassie, and another by a writer for the Guardian newspaper. Unfortunately the production company has yet to send me a copy so I can’t add my own comments.

From Cassie:
Channel 5 is one of 5 channels available to everyone within the United Kingdom with a TV set. I was extremely pleased and impressed by the program overall. Three births were shown. Clair, our very own Heather and also Clio of Evolution Expands Consciousness.

It started out badly edited really, chopping between Clair (ex nurse in London planning a UC) and three medics – one head midwife from Colorado, a male consultant here in London and a female consultant also based in London. The three medics were obviously saying how dangerous it was, how women die, how “interventions make birth safe” and that the tools they have prevent mothers and babies from dying in childbirth. They also said about 50,000 people each year suffer from PPH (post-partum hemorrhage) in the UK. Didn’t mention the fact this was probably due to them yanking out placentas and cutting women up with episiotomies whilst they were strapped to their backs and immobile through epidurals….

The program hinted for a good part of the hour long documentary…that the practice may not be legal in the UK. They even avoided having their own film crew at Clio’s birth…just in case the film crew was prosecuted. This continued right up until Clair went to see Beverly Beech, Chair of AIMS (Association for Improvements in Maternity Services). At that point Beverly said quite clearly that anyone telling a pregnant woman that UC was illegal was either ‘ignorant or lying.’ The program misquoted the wrong piece of legislation associated with possible prosecution…saying it was 1997…when in actual fact it’s 2001.

Clair I felt was featured most centrally. She is an ex nurse and also a lesbian. They didn’t make as big of an issue out of this as I had expected them to, which was nice. She put herself across on the documentary quite well, being very honest in her fears and her hopes. She went for a class with the British Red Cross…and the man who gave her lessons on how to resuscitate a baby did not at all seem phased when she pointed out there would be no midwife at her birth. He just made sure she understood what he had taught her and seemed quite confident he had equipped her with the knowledge to save her child, should the occurrence arise. She birthed at home with her partner alone. Bit of screaming when the head crowned, but she was ecstatic and far happier it seems with this birth than her previous two experiences.

Heather – beautiful! Was filmed with our dear Laura at a gathering that was held at Laura’s home with other women. The birth was beautiful. Unfortunately out of all of them, this is where the negative spin came when Heather still hadn’t birthed the placenta. The ominous narration of ‘this is the most dangerous time and Heather is seriously at risk from PPH and infection of her and her baby.’ It was the only time I yelled at the TV. Of course everything was fine but it almost gave the impression of ‘thank god…see how lucky she is.’ It also showed Heather, checking her blood pressure in Wal-Mart lol, and her meeting with a midwife to learn how to resuscitate a baby if needed. The midwife was quite negative when interviewed afterwards and said she needed more support. I wanted to slap her a bit lol.

Laura was interviewed. The website shown and apparently…Laura…you have a ‘cult’ following. There was footage shown of Laura’s birth back in 1978. The interview bits that were shown of you were not as choppy as some of the others done with ‘experts.’ You probably got as much if not more coverage as the female UK medic. A basic view of UC came across very nicely from you, as well as your additions on what you hoped Dr’s, midwives and doulas should learn about supporting women. ALSO the UK female medic acknowledged the fact that women were turning to UC because the standard of care they received in NHS hospitals was poor and that needed to change!

So it wasn’t a parade of freaks as some of these documentaries tend to do. It portrayed 3, educated, empowered and confident women giving birth to their babies without assistance. It showed their fears, concerns, hopes and dreams through their plans and births. It also addressed the legal and medical concerns surrounding UC. Overall…as I said….a very good piece on unassisted childbirth.

It also has the net in a spin. I have been dropping hints about the programs on a number of mainstream boards. They are buzzing about it. Even though many of them wouldn’t personally choose to go UC themselves, they admire the births, do not condemn women for choosing to go UC. I can count on probably 1 hand the negative comments I have seen made after the airing of the show (so far) and all of them can generally be put down to that individual’s own personal horrific hospital experience. Well done and congratulations to everyone who was involved in the making of the program!

From Anne Pickard of the Guardian newspaper:
The women in Outlaw Births weren’t criminals. They just delivered their babies their own way
Thursday July 10, 2008

Anyone wondering if childbirth really is as painful as everyone says would have found their answer in Extraordinary People: Outlaw Births (Five). In at least two out of three cases, yes, it really did look that painful. And messy. And not for the squeamish. But it was at least a real and unflinching portrait of natural childbirth – as well as a reminder of how unusual it is to see uncensored images of women giving birth and breastfeeding on primetime TV.

Of course, to get it into the schedules, it had to be given a stupid name. Outlaw Births? The programme highlighted the fact that unassisted births in the UK exist in a legally grey area – but “outlaw”? I half-expected to see mothers popping out little black-hatted baddies with sawn-off shotguns shouting: “Put ’em up, this is a robbery!”

Clair MacVean, a quietly passionate ex-nurse, was sad that her friends thought her mad and that her grandmother would worry. But she wasn’t to be shaken out of her opinions. “Births are overmanaged, over-medicalised and midwives seem to have lost their empathy,” she said. When her NHS trust refused her a home-birthing kit after she refused their midwife, she took herself off to a medical-supplies shop to buy sterile scissors for cutting the umbilical cord. “And who’s going to do it?” said the nice lady in the medical-supplies shop. “Me, probably!” Clair replied, cheerfully. “Oh!” said the nice lady, lost for words.

Two other women shared their experiences and, even though you sensed that nothing bad was going to happen, you knew that it could. And you knew they knew, too. Clio Howie gave birth in the company of her husband and children in a remote cottage in Wales, half an hour from the nearest doctor. In almost complete silence, her baby slipped into the birthing pool and emerged the right way up, the right colour and softly crying as he was laid on her breast.

Clair and the third freebirthing mother, Heather, fared less well. They spent hours screaming and contorted, but both ended up with a tiny, perfect person. Every now and again, an obstetrician or a high-ranking midwife appeared and said: “Our problem with this is that it could be dangerous and someone could die and we don’t want mothers to put themselves and their babies in situations of unacceptable risk.”

Their unsupportive attitude became shockingly clear when Heather, worried that the placenta had not followed the baby out, took herself off to a hospital. There she was treated with disdain. “Well, what do you expect us to do now?” her doctor said. Still, whether you believe these women are taking unacceptable risks or not, their calm dedication made for an absorbing film. “I’ve had several cups of tea, he’s had several little breastfeeds; it’s been a lovely morning – wake up, have a baby, and … ” said Clair, waving her hands, “this is the way it should be. Birth is part of life.”