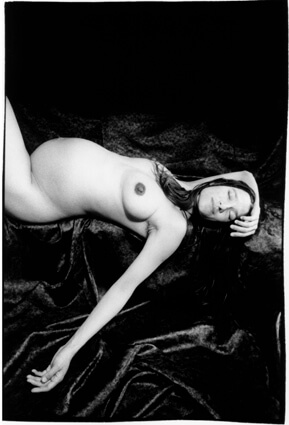 A year and a half after giving birth to my first son John, I realized I was pregnant with Willie. Once again, I had a very healthy pregnancy. I never experienced morning sickness or had any of the other so called “symptoms” of pregnancy (which I believe are often fear induced). I decided I would give birth on my hands and knees because that had worked so well with John, but in a dream I was shown otherwise. In the dream, I was watching a woman giving birth standing up. She was straddling a little plastic baby bath tub and catching the baby herself. As I watched her, I heard another woman very gently say to me, “Tell her to remember not to do too much.” I understood what the woman was saying and the peaceful feeling of the dream stayed with me for the remainder of my pregnancy.

I want to say, at this point, that I don’t follow every dream I have, but this dream was different. It seemed to be coming from the deepest part of my being. And so, I decided to follow it faithfully – I would catch my baby myself as I stood over my little bathtub, and I would move out of the way and essentially do nothing to interfere with the process.

A few minutes later I was walking across the room when my water bag broke. I took out my little bath tub and stood over it as I had been shown in the dream. At that point I couldn’t feel the contractions, but I knew I was having them because when I put my hand inside my vagina, I could feel my pelvic muscles rhythmically contracting around it. A few minutes later a foot appeared between my legs. I wasn’t expecting a breech birth, although a friend of mine told me during my pregnancy that he had dreamt he saw the baby inside me standing right-side-up.

David and I said belief suggestions that everything would be all right, and then we patiently waited for Willie to be born. Little by little his foot got lower and soon his other foot popped out. When I felt the time was right, I gave one push, and gently pulled him out by the feet. David and John had been in the other room but walked in just as Willie emerged. David yelled excitedly, “You did it!” and Willie immediately began to nurse. (Incidentally, twelve years later I read that Michel Odent, the well-known French obstetrician, says that for a breech delivery a woman should always be in a “standing squat” or “upright” position and an attendant should do absolutely nothing to interfere if at all possible. This had been the message of the dream.)

Soon after the birth I dreamt that Willie was speaking to me. He told me that part of the reason his birth had been so fast and easy (he was born two hours after the first contraction) was that he hadn’t been afraid either. Babies are always picking up on our beliefs, both before and after birth, so a fearless mother means a fearless baby.

Zachary – Having a Baby “On the Way!”