I dreamed of delivering my own baby, unassisted since I first became aware of where babies come from. I really could not fathom the idea of being watched by strangers for such an intimate act. At 22 I gave birth to my first baby at home with my boyfriend, a midwife and her assistant. The presence of the assistant just sucked! I did not like her one bit. The homebirth was definitely a joy and I really felt accomplished at not doing it in a hospital, but it was not the fulfillment of my dream.

When I was 23 I handled a second trimester miscarriage alone at home. It was a missed abortion, I knew the baby had died but it did not come out for three months. So many midwives, nurses and doctors told me to stay on bed rest and get a D&C but I would not. After three months of taking it easy, I decided to take a bike ride. I rode 12 miles and when I got home I went into labor and passed the fetus intact within the amniotic sac, easily and without any of the feared complications that so many people warned me of.

At 29 I gave birth to my son at home. I labored with my boyfriend at home all night, planning to not have anyone else there with us, but when I hit “transition” I told him to call my friend Alice who is a midwife. She came and told me, “Everything is just fine,” then I pushed my baby out into my own hands while she took a low key spot in a chair in the next room. He was born in the caul.

On May 8, 1997 I finally had my unassisted birth! After the two previous births, I had just resigned myself during the pregnancy to call a midwife. No sense messing with the idea of an unassisted birth when I know that I will just lose confidence at the last moment. So this time I planned for a midwife, a doula, my boyfriend, and my mother (who never experienced birth as I was adopted) to be present. But with this baby girl, I had the most incredible experience of surrender through the whole pregnancy, and acutely during the day and night before she was born. I felt physically and emotionally weak in the face of the power of her arrival, and I was not afraid of the weakness. I woke up at about 1:15 a.m. and had a rush of tingling all over my body, then the shakes, followed by about 10 contractions and she slid out into my hands before I had a chance to even call anyone. It was fantastic!

I had never turned on a single light in the house. She was born into perfect darkness and we didn’t turn on a light until at least one hour after her birth. I did not look for her sex for that long either. I just rested with her in my arms saying, “thank you, thank you, thank you,” and “I love you baby.” She nursed beautifully in the darkness. We awoke our 8 year old daughter after one hour and she joined us for the rest of the night.

Raven was born as best we can guess at about 2:26 a.m., only about 10 contractions and 45 minutes after labor started. I really believe that her birth was the way it was because of my surrender, peace and trust of the weakness I experienced so profoundly through the pregnancy, and the night before the birth. Her personality is the same, pure peace and calmness. She smiles continually, and awaits her mother’s attention to her needs with patience and understanding. To be weak in the face of change, to surrender everything to the forces of nature and god, this is truly the challenge of birth, life and death. 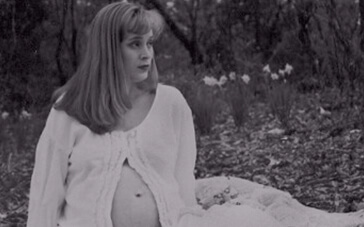 The Birth of Albion