It was an early morning in late May when I awoke with labor contractions. It was 3:30am and great vibrations accompanied my first two contractions. I enjoyed them. Neither my husband nor I knew at what point during labor water breaks. We didn’t know about the process of contractions in reference to when birth was coming. I liked it this way. In the privacy of my little apartment, no one, not even myself could suggest that my labor was either not progressing or progressing too quickly (if that’s even a thing). I liked to think about how animals birthed peacefully without reading up on the process beforehand.

My early contractions felt like menstrual cramps. At 5:30am the contractions were becoming more frequent. So, I awoke my husband. He groaned and moaned and didn’t want to get out of bed. “Jake, I could give birth! Don’t you want to be awake for it?” I heard more groans in response. Finally, Jake did awake and was as present with me as he could be so early in the morning.

We first relaxed on our patio. Jake had set up canopy curtains for out there a few days earlier. With the curtains drawn we could enjoy the smells and sounds of the crisp morning with the comfort of privacy. We played cards and drank tea as my contractions continued. There was no pattern to my contractions, they randomly occurred. By 12:00pm my contractions stopped altogether. I was able to nap. So, Jake and I laid down in bed and slept for a couple of hours. I awoke to contractions much more intense than previously. Around 3:00pm I wondered when my water would break. I had felt a gush of watery substance flow from my vagina about four days earlier and I wondered if that could have been it. I decided it was time to research. I discovered that the earlier gush was probably what’s called my “mucus plug”. My water break was what’s called “a slow leak” and had probably started just an hour earlier. I labored in the bathtub, in bed, in the rocking chair and pacing. The contractions were getting more intense and closer together. I awoke Jake from his nap.

Jake and I were hungry and didn’t have food we wanted to eat. Jake researched grocery store delivery but before he could order anything, I yelled from the bathtub. Jake came rushing in from the office, just across our small hallway. “Jake, I need food now!” Jake brought me food which I quickly ate up. (I hadn’t eaten all day.) The contractions were getting very intense, more intense than I expected. I was trying to stay calm and quiet. I tried to think of them as pleasurable. And then I tried to ignore them. Neither worked. My imagination of what contractions should feel like wasn’t what I needed at this time. I needed to be feeling what was present but I wasn’t. As my contractions intensified, so did my pain. It was about 5:30pm and I vomited in the bathroom sink. And then thirty minutes later I vomited again. And again, an hour after that.

I spent most of my time in the bathtub. But I continually got up to use the toilet. I felt like I had to poop badly and it wasn’t until later that I realized the pressure I felt was not poop! The contractions began occurring almost without breaks. I knew birth was near. I stood/squatted in the bathtub (almost all the water had drained out). I experienced excruciating pain. I started screaming and pushing with each contraction. I hoped none of our neighbors would call the cops—surely they could hear me screaming! Jake was in the bathtub right behind me. He was so calm the whole time. He stabilized me and told me to listen to my body. He told me that I was doing a good job. And he told me that labor would be over soon and our baby would be born.

During the quick breaks in between contractions I asked Jake if he could see our baby. The first couple of times he said “no,” but then he said  “I think I can see our baby, I don’t know. It’s like a purple disc with hair on it.” It was unreal to me that I was going to get to see our baby soon so I wondered as well if that could be our baby or just something else. But with every contraction Jake told me that he could see more and that it really was our baby. It took me four pushes for our baby’s head, and then the little body rapidly slid into Jake’s arms. It was 8:30pm. The baby cried. I checked for the gender and we had ourselves a baby girl!

I sat on the bathroom floor with my baby in my arms. I put her mouth up to my breast but she wasn’t interested in sucking yet. I was in discomfort when I sat but after ten minutes the placenta slipped out of me and at last, I was relieved. And I was in the happy company of my new family. I went to the kitchen and grabbed a bag as Jake held his daughter. We put her placenta in the bag to carry around with her. We took a family shower and then baby and I snuggled up in bed. Now it was 10:30pm and I wanted my mom to come over. Jake ran over to her apartment two buildings down. She cleaned up blood (blood was all over our apartment!) and grocery shopped for us.

Birth was amazing and couldn’t have been better. The only thing that I would change was the way I experienced it. During my entire labor, I repeated in my head stories of tribal women giving birth. I repeated quotes from admired unassisted childbirth literature. These stories and quotes actually distracted me from allowing my birthing instincts to be fully active—and also, I was controlled by my idea of birth rather than allowing my current experience of birth to overtake me. I remembered a story about a tribal culture that believed that by not screaming out the safety and easiness of birth was enhanced. And so, I desired to be quiet during my labor. Looking back at my birth experience, I think my instincts compelled me to make many sounds during my entire labor. But it wasn’t until the end of labor that I stopped controlling myself and let my body make sounds. Had I been in the present and felt totally free, and had not lived in my head, then I think that my labor would have not felt so painful. I believe that labor doesn’t have to feel painful.

Two days later, we named our baby Sydney-Joy, after both of our middle names. We didn’t talk about names before her birth. We knew that the name would come to us. And truly, the name felt inspired. We cut her cord two days later since some dried up and so we knew she wasn’t receiving nurturance from her placenta anymore. Breast feeding was easy and enjoyable for me. Her first couple of days she didn’t eat much but I knew that she would latch well when my milk came in (and she is a great eater now!). Five days later I finished birthing her placenta. (I had felt something hard in my tummy but didn’t know it was her placenta until two small placenta pieces came out.) And then my body was done birthing.

Sydney-Joy likes to sleep on my or papa’s chest, belly to belly. Her body language is full of love and delicately awesome cuteness. Sydney-Joy is beautiful. She is our princess and I couldn’t be happier with her and the healthiness of her birth for both her and me. As for what I have learned for my personal journey: I must practice listening to my instincts and accepting every moment, even the most intense of moments, as a moment perfect to live in.

It was simply perfect! He is perfect! And I’m forever grateful that I got a chance to give birth so peacefully, to such a peaceful soul. 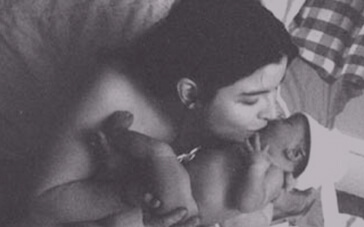 Giving Birth To An Angel